How Old Do Kids Need to be to Play Esports? 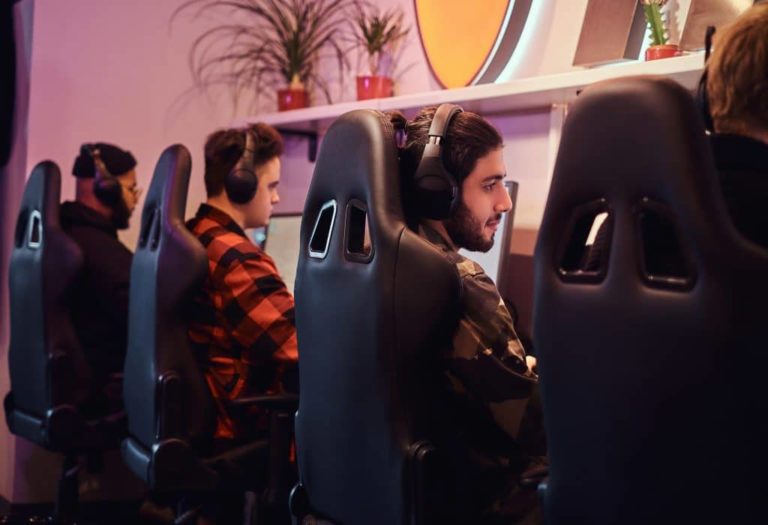 The whole reason we started this website was to help our parents and sister know whether esports provided her with the potential for a career. One of the first questions our mom had was if our sister was even old enough to compete.

How old do kids need to be to play esports? There are no esports age regulations guiding every league. Each league is allowed to set their own age restrictions. In the Overwatch League, you have to be at least 18 years old to compete, but in the Super League gamers can be 6 to 16 years old.

The athletes competing in professional gaming are getting younger and younger. I can’t imagine playing in one of these leagues as a teenager, I was way too awkward and uncoordinated.

Even though athletes are getting younger, the larger leagues are still trying to put an age restriction in place for competitions.

Hopefully, that calms some of your minds! Even though you support your child’s desire to play you may not want them distracted during high school.

Esports companies understand your worries and are working to address them.

They know their sport isn’t as commonly accepted and carries some controversy amongst parents.

Thankfully, this mindset is slowly changing, but organizers are still aware that professional gaming is not the norm.

Being a professional esports athlete involves a lot of travel, intense stress, and the potential to earn millions!

This is a lot for any teenager to handle, which is why so many leagues put an age limit on competitors.

Some of the most popular gamers are 17 years old or older.

Too Violent for Some

These age restrictions are also put in place to protect kids from playing games that might not be suitable for kids younger than 17.

We aren’t talking about anything new by saying that some games can be very violent. This violence has caused some parents to worry about the content their kids are seeing.

If you’re new to gaming, you’ll want to know all about the Entertainment Software Rating Board (ESRB). They rate video games based on their content very similar to how movies are rated.

This helps parents and esports organizers know how old a child needs to be to play a game.

Games like League of Legends are rated ‘T’ making them acceptable for 13-year-olds while Call of Duty is rated ‘M’ meaning it’s for mature audiences.

If a tournament is using a game rated ‘M’ there are even restrictions on kids being in the audience at these tournaments.

The Esports Arena in Las Vegas has a stringent set of rules that you must be 17 years or older to watch these tournaments unless accompanied by an adult.

Even with restrictions, there are still athletes competing much younger than 17!

As a millennial parent, it blows my mind seeing how young these athletes are that are competing.

I found it fascinating to learn about the careers of these young gamers.

Some very young gamers allowed to compete because their respective esports leagues don’t have any age restrictions.

The most recent young esports star to be signed to a team contract is thirteen-year-old Fortnite phenomenon Kyle ‘Mongraal’ Jackson.

Fortnite is a popular esports game that’s both a shooter and team-based.

Because there is no formal Fortnite esports league; teams are willing to sign athletes younger than 17. There are no rules to say they can’t have these players.

Kyle is very popular among his teammates and is respected. One of his teammates even said, he would have never known Kyle was 13 based on their conversations before their meeting.

It’s this maturity level that convinced high-profile esports teams to take a gamble and sign him to a large contract.

DID YOU KNOW?
Kyle Jackson is not allowed to play games after 9 p.m.
– the BBC

Once an official Fortnite league is established, it’ll be interesting to see if Kyle can still compete or if they use the same age restrictions as other leagues.

What sets Riley apart from even Kyle; is that Riley has actually won esports champion.

He’s been competing in esports tournaments since he was 12 and won his first championship at 13.

Since then he only continues to grow in skill and popularity. Many consider him to be one of the best gamers in the world.

Aspiring esports stars are also showing their skills in amateur competitions with the hope of landing a spot on a corporate team.

I’m sure in the years to come it’ll become common for athletes to be closer to Kyle and Riley’s age.

What’s a Parent to Do?

The desire to join an esports league is widespread in this new generation because of the ease of access to games.

Growing up in the 90s our access to video games was limited. The Nintendo 64 could only do so much and didn’t even have online gaming.

In today’s world, kid’s cell phones are more powerful than my Nintendo 64 was.

Kids are developing the motor skills to play video games at a much younger age making it desirable to even pursue an esports career.

So how are you supposed to positively encourage your kids in their love of video games while helping them know if this is something they want to do?

Super League to the Rescue

I’m happy to report that there is a way to do both…it’s called the Super League.

I actually didn’t even know the Super League existed until I started researching this topic. Now that I know it’s there I feel much better about encouraging my own kids to compete one day.

The Super League is for esports athletes between the ages of 6 and 16. Think of it as a typical youth sports league only instead of playing baseball they’re playing video games like Minecraft. Sort of the “Little League” for esports.

Esports is still such a new thing so the Super League was designed to provide a way for kids and parents to get a taste of what esports tournaments are like and how kids can compete.

It’s one thing to compete online in your own home. The Super League lets kids feel the pressure of live competition surrounded by hundreds of fans and helps them learn how to work with teammates in person.

A lot of kids are discouraged from playing sports because they’re not athletic enough or prefer video games. This is where the Super League has thrived.

It gives kids the opportunity to socialize with peers that share a passion for what they love and build friendships.

The organizers of the Super League encourage positive communication and team play. There’s a lot of strict rules about vulgar language and negative comments.

DID YOU KNOW?
The Minecraft Super Zombie Strikers – Tournament Rules states:
“A Player may not use language that is obscene, foul, vulgar, insulting, threatening, abusive, libelous, slanderous, defamatory or otherwise offensive or objectionable; or promote or incite hatred or discriminatory conduct, in or near the match area, at any time.”

This makes it a very welcoming environment for those wanting to play video games professionally.

It’s also a way for young athletes to gain a following and to get noticed for future professions.

You better believe scouts and esports organizations are paying attention to these tournaments as they play throughout the country.

Especially since they host tournaments using the most popular game in the world, League of Legends.

All of the games they use in the Super League are rated ‘E’ for everyone or ‘T’ for teen.

Just between you and me, I am slightly jealous, that the Super League wasn’t around when I was a child. I don’t think I would have been good enough to compete, but it would have been fun!

What is a good game for my child under 13 years old to play? The most popular game on the esports circuit being played by kids under 13 is Minecraft. It’s a building and construction game that’s become wildly popular. There’s no harmful content, and it’s wholesome for the whole family.